COVID-19: We are committed to health and safety. Read more.

Sara Bruner: A love/hate relationship with the theater

Sara Bruner is one of the most recognized faces in Boise, yet few people really know her. They certainly know her work. For 15 years, Bruner has transformed into Ariel, Rosalind and dozens of the classical theater’s greatest ingenues. Later this summer, Bruner graduates to one of the most sought-after roles in the Shakespeare canon: Katherine in Taming of the Shrew. 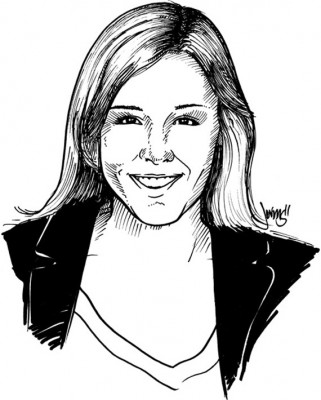 Is it fair to say that playing Katherine is a significant change for your career?

It’s a huge deal for me, mostly because I’m consciously and intentionally graduating from all of Shakespeare’s ingenues and moving on to the leading ladies. I’ve never played anyone like this before. We’ll see how it goes.

Many actresses aspire to a lot of the parts that you have already played. Have you ever had a checklist of roles?

I never had that list. When I was growing up in Burley, I couldn’t even name three women in Shakespeare.

Yet you started with the Idaho Shakespeare Festival when you were 18.

It was very different for me in those days. But it’s that way for a lot of young actors. Honestly, when you’re young, you can get into some bad habits, like partying a bit too much.

Did that ever catch up with you?

OK, now remember, I was very young at the time. I threw up once on stage. Honestly, I was hungover. We were on tour and I was playing Juliet and I just wasn’t feeling well, so I drank a little to much red All Sport [energy drink]. I was downstage center and one of the other actors was delivering a speech about poison, and I was hoping that he would just talk faster. Finally it just happened, and I threw up. This is so gross. I threw up in my hands, and of course, it was red All Sport. I had to run off stage and run back to finish the play. That was the worst, totally self-inflicted, ridiculous, embarrassing, awful moment.

What might you say to those people who are a bit surprised that you’re still in Boise and not on the New York stage?

It’s a question that frustrates me. I’ve never been the type of actor who gravitated toward New York. Even my parents sometimes say things like, “Maybe you’ll go to Broadway.” There’s something very naive about that. Most people don’t realize that there’s an entire subculture of actors who are functioning in regional theater. They don’t realize that many of the actors in New York come to places like Boise to work.

In addition to your acting, you hold the title of artistic associate. What does that mean?

I assist Charlie Fee [producing artistic director] on most things. I’m casting a lot of the time. It’s mostly artistic odds and ends.

When can we expect you to direct one of ISF’s main productions?

Are you talking about it now?

The truth is, I’ve been declaring for a while that I want to be a director. But it’s a more difficult transition than I had expected.

What are the chances of you directing a production on the main stage in the next two years?

When you see a younger version of yourself in a girl who aspires to be an actress, what might you tell her?

You always have these people coming at you with what they think is the answer to success. I always liken it to religion–everyone seems to think they know the way to God. The trick for an actor is to not believe in one particular way but to carry around your own bag of beliefs. Acting is so easily ego-driven–to be a star, to be recognized in the community–but it’s important to me to demystify that.

But you have had more than a taste of that kind of success.

In all sorts of ways. I just don’t think it’s healthy to ride that kind of energy.

Can you see yourself doing this for the rest of your days?

Is it a love that is constant for you or does it change?

Where are you currently?

Love, definitely. It’s a summer of love [strong laughter]. Theater and I are doing quite well now.